U of S Canada 150 Project Successes

Thank you for commemorating Canada’s anniversary of Confederation with us. Witness in this page the many ways the U of S is celebrating this anniversary and how faculty, students, staff and alumni are contributing to Canada and the world.

On September 15, for the first time in its history, the University of Saskatchewan hosted a citizenship ceremony on its campus. 50 new Canadians took the Oath of Citizenship with Presiding Official Lynda Haverstock, Saskatchewan’s former Lieutenant Governor.

Speakers included: U of S President Peter Stoicheff, Lee Ahenakew, chair of the U of S Board of Governors, and Ghassan Al-Yassin, a U of S graduate student from Iraq who became a new Canadian last year.

You can read Ghassan's inspiring speech and check out some photos of the event below.

On September 27, the U of S hosted a conversation with The Right Honourable Jean Chrétien as he talked about the past, present, and future of Canada. U of S Chancellor Roy Romanow, former Saskatchewan premier, interviewed the former federal leader. A question and answer session and discussion with the audience followed.

On October 4, the U of S hosted a conversation with The Right Honourable Kim Campbell as she talked about the role of women in Canadian politics. U of S Chancellor Roy Romanow, former Saskatchewan premier, interviewed the former federal leader. A question and answer session and discussion with the audience followed.

On November 9, the U of S hosted a conversation with The Right Honourable Paul Martin as he talked about Indigenous education. U of S Chancellor Roy Romanow, former Saskatchewan premier, interviewed the former federal leader. A question and answer session and discussion with the audience followed. The event was part of the McKercher Lecture Series at the College of Law.

In partnership with the U of S Canada 150 Project, the Johnson Shoyama Graduate School was pleased to host a gala dinner in honour of its 10-year anniversary on Thursday, November 9, 2017 at the Remai Modern. The event welcomed the distinguished Right Honourable Paul Martin to the spotlight and included an engaging conversation between U of S Chancellor Roy Romanow and Mr. Martin on Canada’s place in the world. This gala dinner brought together students, alumni, faculty and partners to celebrate the school’s achievements over the past 10 years.

Forum on the Future of Health Care in Canada

On September 18, the U of S hosted a panel of experts as they discussed the best way forward for Canadian health care.

In 2001, the federal government established the Royal Commission on the Future of Health Care in Canada to review medicare and recommend ways to improve the system. The commission was headed by Roy Romanow, former Saskatchewan premier and now chancellor of the U of S. Now, 16 years later, a distinguished panel looked at where health reform is headed.

The event was emceed by Chancellor Romanow. Speakers included:

The event was presented by the U of S Canada 150 Project in partnership with the Johnson Shoyama Graduate School of Public Policy.

On October 12, 2017, the U of S Canada 150 Project, in partnership with the College of Law, hosted the Saskatchewan book launch of The Mighty Hughes From Prairie Lawyer to Western Canada’s Moral Compass, a book on U of S alumnus Ted Hughes (LLB '50) by journalist Craig McInnes.

Among the dignified guests in attendance were U of S President Peter Stoicheff, College of Law alumnus Merlis Belsher (LLB '63), U of S Chancellor Roy Romanow (LLB '64), and Saskatoon lawyer Dan Shapiro (JD '78).

The program opened with greetings from College of Law Dean Martin Phillipson, who spoke of lawyers' roles as public servants, and how there was no finer example of this than Hughes. This was followed by a traditional honour song and prayer by Joseph Naytowhow, a Plains/Woodland Cree singer, songwriter, and storyteller from Sturgeon Lake First Nation.

Shapiro, who was instrumental in bringing Hughes and his wife Helen to campus, spoke at the event, as did Chancellor Romanow, citing the huge impact Hughes had on the province during his time as a Saskatchewan Court of Queen’s Bench justice.

In his greetings, Hughes spoke of his time at the College of Law fondly, recalling how when he started classes in 1947, there were only three professors and a dean, and one woman his class. Funny stories and light-hearted anecdotes were interspersed with serious messages, as Hughes spoke passionately of the atrocities and detrimental after affects of the Indian residential school system.

On October 10, 2017, the U of S Canada 150 Project was pleased to host the launch of the book Residential Schools and Reconciliation: Canada Confronts Its History, by U of S professor emeritus of history Jim Miller and published by University of Toronto Press.

In this unique, timely and provocative work, award-winning author Jim Miller asks Canadians to accept that the root of the problem was Canadians like them in the past who acquiesced to aggressively assimilative policies.

U of S President Peter Stoicheff introduced the event. Copies of the book were available for purchase and signing.

More information about the book and the author here.

Book Launch: A Hero for the Americas

On November 6, 2017, the U of S Canada 150 Project hosted the launch of the book A Hero for the Americas: The Legend of Gonzalo Guerrero, by Robert Calder, U of S professor emeritus of English.

This book is the first comprehensive investigation of this controversial 16th-century figure who is today remembered all over the Yucatán as the symbolic father of millions of Mexican mestizos.

The event was a conversation between U of S President Peter Stoicheff and Robert Calder, followed by questions from the audience. Copies of the book were also available for purchase and signing.

More information about the book and the author here.

On February 13, 2018, the U of S was very pleased to host the launch of the new book by President Emeritus Peter MacKinnon, University Commons Divided: Exploring Debate and Dissent on Campus, published by the University of Toronto Press. In the book, MacKinnon investigates issues of university governance in Canada, while analyzing several major cases at the university level that have come to show infringements on freedom of expression.

The event was introduced by U of S President Peter Stoicheff. The talk was followed by questions and discussion with the audience. Copies of the book were also available for purchase and signing.

An excerpt from the book is available here.

On May 30, 2017, the University of Saskatchewan partnered with Indspire to bring the Indspire Cross Canada Youth Laureate Tour to our campus. In the form of a panel discussion, the event showcased local Indspire Awards laureates to dialogue with local Indigenous and non-indigenous students, educators, parents and the community about the importance of a solid education.

Check out as well the video interview with Josh Butcher, U of S medical student and former Huskie football player who was honoured by Indspire for his remarkable achievements both in and out of the classroom.

Knowledge is beautiful. Images of Research Photography and Imaging Competition celebrates the most visually impressive and clearly described images of U of S research.

U of S students, staff, faculty and alumni submitted images of their groundbreaking research, scholarly and artistic work in four categories: From the field; More than meets the eye; Community and impact; and Research in action. For the first time this year, students, faculty and staff also submitted 60-second videos  describing how their research makes a difference for Canada.

The competition received 100 entries, including 12 video research pitches from across campus and beyond, with more than 8,700 visitors to the website from 30 countries. Researchers with the best entries were awarded prizes. The winning images are on display on the web and in Place Riel, north concourse from April 11-13, and April 17-18.

The U of S Canada 150 Project allocated a total of $1,200 to this initiative. Each of the eight participating high school students in the Saskatchewan Regional Competition of the 2017 Sanofi Biogenius Canada competition were awarded a U of S “Canada 150” Biogenius Entrance Prize, a $150 tuition waiver that would be applied to the student’s account if he or she chooses to attend the U of S.

Connecting the U of S to the World

As part of the celebration of Canada’s 150th anniversary of Confederation, the U of S created a number of new scholarships for undergraduate and graduate students.  These opportunities are geared to helping students develop a global perspective and approach to addressing the world’s problems.

Read the stories of their adventures around the world.

Scenes of Plains Peoples is a piece commissioned by the University of Saskatchewan to commemorate both the 150th bicentenary of Canada, and the 110th Anniversary of the University of Saskatchewan. The piece, by U of S Alumni Paul Suchan (BEd’07, BMus’07), is a celebration of the land and of the different peoples that have inhabited it. The piece was performed by the UofS Wind Orchestra, the Jazz Ensemble and the Greystone Singers.

This video presents the performance by U of S Jazz Ensemble that took place on March 26, 2017 at the U of S campus.

The following videos present the performance by the U of S Jazz Ensemble in concert with JUNO winning First Nations artist Murray Porter that took place on March 26, 2017 at the U of S campus.

The University of Saskatchewan, along with the University of Regina, was pleased to present the Saskatoon StarPhoenix and Regina Leader-Post Canada 150 Youth Essay Contest for students enrolled in Grades 8-12 in Saskatchewan schools. Students wrote essays of a maximum of 800 words on one of the following topics:

by Kathleen Smith of Prince-Albert

I sit on the bus, earphones in, music blasting. Not so surprisingly, it’s an American singer, but that’s what everyone listens to.
I take my bag off of the seat next to me, knowing that we’re coming to the stop outside the YMCA. It’s an organization that helps community members, helps people find homes and jobs, recently helping refugees resettle into this new and bizarre land...

by Sania Sami of Saskatoon

On May 1, I woke up with a sound scattering around me because my parents were about to take the Canadian citizenship test.
The wind was blowing and the sun was shining brightly in the sky. They were excited and were wishing themselves good luck to pass the test... 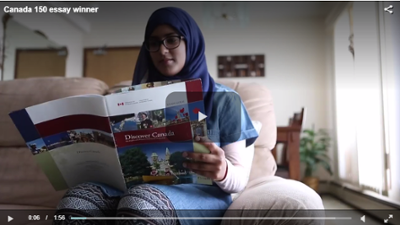 by Xinyi Zhang of Saskatoon

I hear a woman’s voice through the loudspeakers, but I cannot understand what she is announcing.
My eyes act as if they have been deprived of sight. Fair toned people with light coloured hair and blue eyes pass by me and I dare not stare too long. Sometimes a stranger and I make eye contact. I turn away every time, but it is never before I see a smile that grows across his/her face.